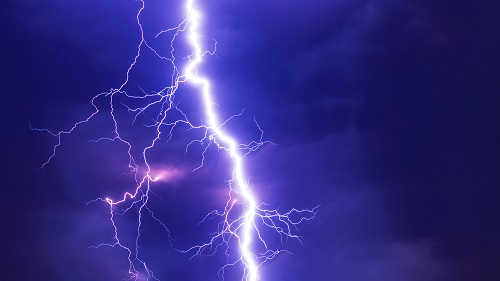 The July full moon is at 1 degree of Aquarius. The Sabian symbol for this Full Moon is “an unexpected thunderstorm”.

On one hand, you don’t want to be caught unprepared – for instance, out in the middle of the woods, or on a lake. On the other hand, if you find grounding, inner calm, and courage, there is much that can be channeled from this full moon.

This full moon feels a little Benjamin Franklin! Benjamin apparently ran around flying a kite during a storm, determined to study thunder and lightning and their inner workings. In the midst of it, he apparently discovered the grounding rod. A founding father of the United States, he was also coined a radical by the British empire, was a key figure in the American Revolution, and signed the declaration of Independence in 1776 – all very Aquarian!

Aquarius’s traditional ruler is Saturn (associated with the father – ‘founding father’) and its Modern ruler is Uranus (associated with currents, revolution, and change). Saturn and Uranus have been squaring each other all year and they just so happen to be the rulers of this full moon.

If we look at the energy that Benjamin encompassed, he seemed to bring these two energies together seamlessly. Perhaps it was his ability to have his own internal grounding rod.

Notice how close in proximity Benjamin’s discoveries were to the discovery of Uranus in 1781!

The Full Moon is part of the moon phase group that started with the New Moon on January 24, 2020. Something that was seeded at that time comes into a culmination… covid? Or the many lessons that covid brought into your life? Take a look over the last 18 months, what changes did you make to respond to the pandemic? Some people adjusted their relationships, either bringing them closer or breaking them up. Some shifted living circumstances. Others became more aware and focused on their values. At this full moon, additional surprise elements may arise causing you to ground deeper into the changes that were made. If you have not made changes, and only thought about them, this full moon may be the lightning under your butt to shift you into action.

Many are feeling the shift upon us and are worried about misuse of power – the loss of individuality, loss of autonomy, and loss of freedom are potential misuses of the power of Aquarius. So are revolutions. But the power of Aquarius is in love peace and compassion. Its power is in community, groups, and friendships. I would suggest getting together with others with common interests to help manifest the power of Merkabam. (If you are in lockdown, find a way – connect via zoom and have a backup plan for if there’s no internet).

How do you want to see the use of computers, artificial intelligence, innovations, electricity, or electric waves (some are healthy and healing and others no so much)? What breakthroughs do you want to see? What do you want from the media? What do you want for humanity? Human rights? All of these areas are ruled by Aquarius. Dream big! Dream outside the box! Aquarius is also our hopes and dreams!…. Dream what you want in fine detail…. And then bring in a ceremony to help you harness its power.

This full moon brings us back to that energy and allows us to reflect on how much detail we have put into our dreams. Celebrate the gains and if there are gaps in the details of your dreams, use this time to let go of whatever is getting in the way, and add more fine details to dream up what you want.