The New Moon is in Sagittarius and is also an eclipse. 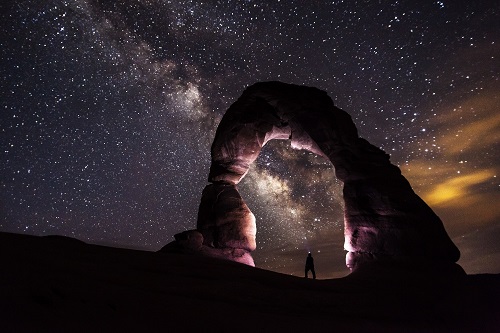 Sagittarius is the truth seeker. To seek its truth it must get lost in a different country, sit with masters and gurus, debate with the highest academics, connect with God, a higher intelligence, or a path to enlightenment. As this is a south node eclipse, it is calling on us to let go of the lower forms of Sagittarius – self-righteousness, dismissing others’ beliefs, preparing what to say in your head, and not listening to what the other person is saying. Fortunately, as the sun is blocked by the moon, a moment of silence happens and listening is the result!

The Sabian symbol for this eclipse is “a widow’s past brought to light”. This speaks of unfinished business coming up so that we can move on. Maybe we see the truth of who the spouse was. In our grief he or she was perfect, but now we can say… Ya! he was a jerk, ya! She was controlling. The truth comes into the light and helps us to accept and move on. This happens, not just in relationships, but in all areas where we have experienced a loss that stops us from moving on.

This new moon eclipse has other aspects that support this idea of coming to terms with the truth. The first is that it is conjunct Mercury. Mercury helps us to seek knowledge and expand our worldview. It helps us to be curious and open to other ideas. The eclipse is also on the great attractor. The great attractor is not a planet, but a point in the heavens… it’s a black hole in the Laniakea Supercluster. The Great Attractor gets its name because, like a magnet, it draws everything in toward including the milky way, which also obstructs it. To see what’s there other frequencies like infrared are needed. This points to what is needed at this eclipse. A different frequency allows us access to the great unseen mysteries  – with the eclipse currently at this point, they are flooding in… but at what pole of the magnet are we operating? Are we attracting or repelling?  Seek out ways of raising your vibration to operate at the attraction pole, like meditation, sitting by the seaside, interacting with your plants, practicing gratitude, and singing. Like the door in the closet to Narnia, this may open up an entirely new world… and world view!

The new moon eclipse is also on Huya. Huya’s namesake is the Wayuu rain god (the Wayuu are indigenous people from the Venezuelan and Bolivian areas). She is associated with abundance and environmentalism. This eclipse also calls on us to view the truth of abundance and our natural world. Mother earth is considered sacred in the worldview of the Wayuu indigenous peoples. So much so that t they inspired a law…Law of the Rights of Mother Earth. The rights include the right:

What else do the indigenous peoples of the world say about the abundance and the environmental needs of the earth? At this new moon eclipse, it’s time to listen.