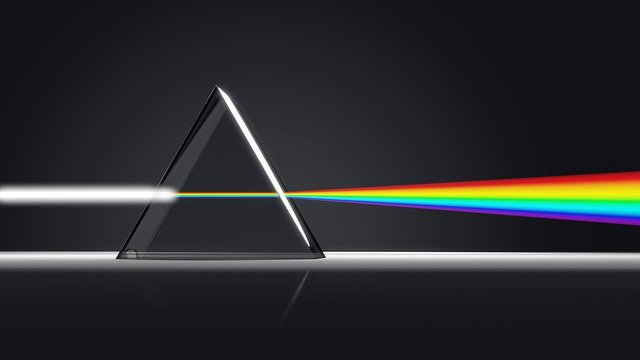 The Pisces full moon is at 28 degrees of Pisces and is conjunct Neptune making it an especially ethereal Full Moon. The Sabian symbol for this full moon is “a prism”.

What is a prism? It’s “a transparent body that is bounded in part by two nonparallel plane faces and is used to refract or disperse a beam of light”

Light is unity. Broken into parts it creates colours and the prism allows us to see those colours. Light is beautiful, but so is colour. Think of how each colour has its own energy and connotation. And how the duality of these two nonparallel structures helps us to see it.

Each colour can be seen negatively or positively. That’s the nature of duality. Purple can be spiritual or it can be snobby. Blue can be trustworthy or it can be depressive. Green can be luscious or it can be envy. Yellow can be joyful or it can be caution. Orange can be confident or it can be cheap. Red can be passionate love or it can be danger. For those of us who are striving to be better people. We try to stay out of the negative by being in the positive. But in the world of duality, you can’t get away from the divisions. We have to accept that both exist.

Some mistakenly think that being in the positive is being in the light. But the metaphor of the prism helps us to see it is not. Positive is only the opposite of negative. But pull the duality of all of those colours, and their positive and negative meanings together and you have unity. This is the work of Lightworkers. It’s a balance of duality. It’s shifting the nonparallel planes into parallel planes. It’s gathering in the light, recognizing that within the light is both positive and negative.

Embrace the power of the spectrum of colour at this Pisces full moon! Check-in with your spiritual selves to assess how well you accept all the colours and their meanings. Without fully embracing them both you will be unable to gather the light. Are you too far on the positive, forgetting the negative – sometimes this is called spiritual bypass. And with the Neptune energy, it’s easy to do.

This full moon will present us with some negative aspects so we get to check in with how well we respond. The moon so close to the end of the sign is making an out-of-sign opposition to Mars in Libra. Mars in Libra is a little passive-aggressive. And the emotions of the Pisces moon will make it seem wishy-washy. This kind of energy will bring up anger and outburst. They may not be directed directly at “you”… but rather at “some people”. “some people should know better”! some people being those who look, speak, think, act like you… but passively aggressively are not exactly you! The moon is also sextile to Pluto giving the emotions some power and a little bit of manipulation. The best way to handle this energy is to make conscious your unconscious and take responsibility for how you feel.

In this respect, we have a little help. Pisces is ruled by Neptune, but it also has a secondary ruler (or a traditional ruler), which is Jupiter. Jupiter is in Aquarius making a trine to Mercury in Libra. This helps us to be philosophical. It helps us to embrace logic, perspectives, beliefs, and humanitarianism. Mercury is in its shadow phase – it will go retrograde this week. So it will dance with Jupiter a little more over the next couple of weeks. Expect some interesting debates and challenges to your beliefs!

At the end of it all, Pisces and Neptune remind us that we are not separate! Separation is only an optical illusion! But boy do they both love an illusion!