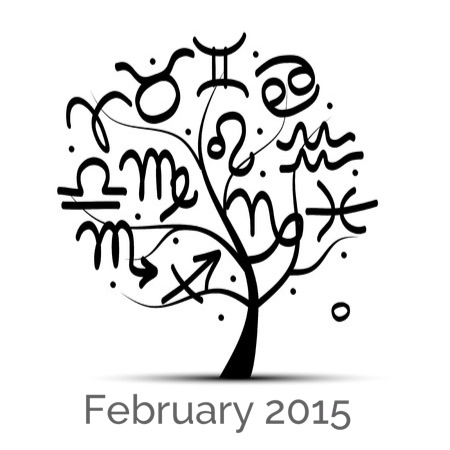 Is there a better way to start the month of love than with Venus conjunct Neptune? When these two come together, it’s romance, universal love, and high ideals. It’s not very grounded, so don’t make any big decisions about love or money. But it is creative, so use the day to pour your passion into something you love, whether that’s a creative project that will make you money at a later date or a relationship filled with promise. On the last day of January, Mars was conjunct Chiron which triggered some wounds on the collective level. It had to do with the idea of authenticity and ourselves. The more we can allow one another to be ourselves authentically, the more we will feel that universal love. All four planets are now in Pisces at the beginning of the month, so the volume is turned up on universal love. With the Moon in Cancer opposing Pluto, it promises to be a highly emotional day.

The Full Moon happens on February 3rd. The Moon will be in Leo joined by Jupiter, creating no less than a flare for the dramatic. We might as well set up a speaker’s corner for this one. Those who will want to be heard will be on their soapbox. If you do hear one of these rants, stop and listen. There is likely to be some original and forward thinking taking place. It may even be a warning Evan Almighty style that will come completely out of left field. But we are now able to see the big picture of what is emerging – if we look and listen closely. Not only might they gain some support for new and exciting ideas promoted, they will also garner a serious commitment to action.

One caveat: The full moon will be sextile the North Node in Libra. This alignment points to the direction that we SHOULD be moving toward universally. Libra is fairness and negotiation – it is the sign that rules love. At the same time, it’s also in a trine to the South Node which is conjunct Uranus, the planet of surprises in Aries – the sign that rules fighting, action and war – so it seems that there may be commitment on both sides. The South Node always feels easier because it’s what we know. Because the North Node can seem unknown and uncomfortable, those who are committed to moving the collective toward love might question themselves. But if action is taken on their end, they can also gain commitment. That commitment will carry on for a couple of days with a strong concentration and focus on effort. Mercury is still retrograde though, so while there may be clarity and commitment, wheels might spin a bit.

We are back to relationships on the 9th when Venus conjunct Chiron. With both in Pisces, there’s a chance for collective wounds (with respect to relationships) to be healed. There is an imbalance in masculine and feminine energies, but the energy will allow us to see the patterns and also find a way through them. We might feel some difficulty in trusting our own intuition at this time. We are learning new ways to nurture and trust our own inner voice. On February 11th, Mercury goes direct again which will help a little by clearing up muddled communications and thinking.

Between the 10th and the 15th, Ceres will square the North Node, square Uranus, and will conjunct Pluto. This movement will bring up strong themes of needing to let go and to transform. In the myth of Ceres, the universal mother, Ceres, starved the world by causing famine when her daughter was taken by Pluto. Ask any mother who has lost a child: this is one thing that you don’t let go, but let go we must. Ceres is in Capricorn, so the things we may need to let go of include the idea of equating achievement with love. Can we let go of the idea that we need achieve to be loved?

The New Moon is on February 18th at 29’59 degrees of Aquarius, square Saturn. This is our second New Moon in Aquarius this year. This is an energy that can make us feel pessimistic. We may have great ideas and possibilities exist, but this is a ‘quit just before the miracle’ aspect. If we can push past the negativity then it is a powerful New Moon upon which to set new intentions. The New Moon is one second away from being in a new sign! That’s right, one second. Don’t quit before the miracle – push through. It’s widely conjunct Neptune, so if you can lean into that Neptune in Pisces, you may find some spiritual inspiration to pull you through. Here is a trick when things seem beyond you: admit it to the Universe. Just say ,“this is beyond me… can you help an earthling out?” You’ll be amazed at the inner resilience and courage that you will find.
The next day on February 19th, the surface tension will break. Mars will move into Aries – its home – where it will feel comfortable taking action. Mercury will also sextile Saturn, clearing up any negative thinking and helping us to be rational and logical.

On the 20th, Venus will move into Aries. On the 22nd, Mars and Venus will be conjunct! It’s too bad Valentine’s Day didn’t fall on the 22nd this year because that’s the day when sparks will fly. Also on the 22nd, Saturn will trine Juno (the marriage asteroid) and Venus and Mars will trine Saturn/Juno on Feb 24/25th. What does all of that mean? It means that in a couple of days, we might see relationships form and deeper commitments take place. This is also true of business partnerships.

At the month’s end, Mercury will trine the North Node. It’s a Friday and a great day to connect with your tribe. If you don’t have a tribe, this is the day you might link in with the right one.

Aries:
You may be pushing people out of the way to get on that soapbox at the Full Moon. It’s in your 5th house of drama and theatre. Try to remember to share the stage and limelight. The New Moon is in your house of humanitarian efforts. Set intentions at that time for anything related to helping others. You’ll be able to find your tribe through humanitarian involvement toward month’s end.

Taurus:
Are you the golden child in your family? You may not know how much influence and sway you hold – or maybe you do. At the Full Moon use your golden child influence for good. Remember the famous are so for either good or evil. At the New Moon, you can set intentions for the right kind of recognition. At month’s end you’ll be able to find your tribe at a career-related conference, maybe where you or others are featured as a thought leader.

Gemini:
You may be very opinionated at the Full Moon this month. You will need to be impeccable with your words as your opinions may be taken as fact. At the New Moon, you can set intentions for higher education. Maybe you have always wanted to get a degree or a particular certificate. You will find your tribe at month’s end by attending something like a Ted talk.

Cancer:
Your emotions will be on the theatrical side at the Full Moon. The emotions that emerge will be heavily based on your self esteem. Yes, the squeaky wheel will get the oil – emotions that are unhinged will get attention but try to stay away from emotional manipulation designed to externally reinforce your self esteem. Emotional theatrics based on managed emotions (and internally achieved self esteem) will make you feel better about yourself. Try a little meditation before expressing yourself. At the New Moon, you can set intentions for how to better share yourself with others. You will find your tribe at month’s end at through group therapy or a strangely enough… a funeral.

Leo:
You might be fluctuating between projecting out a persona: one that others expect you to be or allowing your authentic self to shine. You can allow yourself to be authentic at the Full Moon. You can be extremely convincing either way, but being fair to yourself will make you feel better about your presentation of self. You can set intentions at the New Moon for better partnerships. At month’s end, you will find your tribe by attending a business partnership event.

Virgo:
Sometimes you don’t need to say a word to lead others. It’s your actions that will speak louder than words. Believe it or not, being extremely self-indulgent with sleep, rest, and renewal (maybe even a spa day) will communicate leadership to others more than you know at the Full Moon. You can set intentions at the New Moon for a new and different kind of health regiment – one that fully supports you. You can find your tribe at a group where you compete with your new telemetry band (is it a Garmon Vivosmart? Who got the most sleep?!).

Libra:
At the Full Moon you will have an audience for your political opinions. Just make sure you’re not debating for the sake of debating. Have true conviction behind your political campaign, and stop trying to please! You can set intentions at the New Moon for stepping into your authentic leadership. You can find your tribe at month’s end at an improv class.

Scorpio:
Whatever you have been working to achieve will now bring you into the spotlight at the Full Moon. Others might join or oppose you; your influence will make others either love or hate you. Standing strong in who you are will help you grow a thicker skin. At the New Moon you can set intentions for your emotional involvement, security, and family ties. Toward the month’s end, you can make connections through family ties or the Grand Poobahs at the Loyal Order of the Water Buffalo.

Sagittarius:
Your teaching others now and they may see you as the latest and greatest Guru. You might need to make some adjustments in your teaching style to incorporate new learning. Remember we often teach what we need to learn. At the New Moon you can set intentions for getting to know your neighbours. Maybe your idea is to promote an inventive community program. Toward the end of the month, you can connect with your tribe at your local community center.

Capricorn:
You’re like the Mata Hari at the Full Moon but make sure to use your hypnotic influence to promote love. At the New Moon you can set intentions for increasing yourself, your esteem, and your wealth. Grab the book Think and Grow Rich by Napoleon Hill. You can connect with the right tribe at the month’s end at a Think and Grow Rich meet-up group.

Aquarius:
You may be handshaking a deal at the Full Moon. It’s one that will put you in an influential and leadership position. You may be feeling unsure about your ability, but you have a unique perspective to offer. Plus, they wouldn’t have struck the deal if you were not the right person for the job – you know more than you think you know. At the New Moon, you can set intentions for how you want to project and brand yourself now. You can connect with your tribe at the month’s end by just being yourself – you’ll make yourself magnetic to the right people.

Pisces:
You make an impact and gain respect by focusing on detail at Full Moon on the 3rd. Others will be impressed by your thoroughness. At the New Moon you can set intentions for a deeper spiritual connection. You can link up with your tribe at a meditation event when you meet like-minded people. You might even realize that your tribe is your spiritual guides.